Races are slowly restarting across the UK as both the governing bodies and event organisers get to grips with the relevant safety measures to make their events ‘covid secure’.

This was to be first return to racing since March when I ran the MK Festival Of Running Half Marathon on 15th March. That was an odd day. Lockdown was still something happening in other countries and there were no restrictions on public gatherings so thousands of people congregating for a race was unremarkable although many could feel things were due to change and the compere even remarked that this might well be the last big event for a while and he was certainly proved right. Gradually events were cancelled, then club runs, then schools and pubs closed, then even seeing anyone outside your house was banned and the thought of 40k people gathering to run London Marathon became absurd.

161 days later and I’m driving to Box End Park for my first race back wondering how this is all going to plan out.

The Ultra 5k is now in it’s 5th year, and requires runners to race 5k on the hour, every hour for 5 hours. Final positions are calculated on elapsed time so if you set a blistering first lap and then crawl around the final four you’re going to tumble down the leader board.

It’s a similar format to the Big’s Backyard Ultra except that race has no set finish and is a last man & woman standing event so can go on for 60 or more hours. Fortunately, we all know we’ll be done in five laps and not need to book the next week off work.

The event is normally held in July and often clashes with other events for me so for once the Covid postponement works in my favour and I can attend.

It’s held at Box End Park outside of Bedford. It’s primarily an open water centre and many of my immoral running friends attend a couple of times a week to slide into rubber gimp suits and splash about in the water for a few hours. When I pull up it’s more like a holiday camp with motorhomes and tents set up around crystal blue lakes with cyclists and swimmers bustling about. Most shocking is the torrent of swimmers in the lakes. Who knew so many grown adults thought a group bath was the best way to spend a Sunday morning?

5k (well slightly over according to everyone’s Garmin) lap on grass, starting flat and then with some cheeky climbs for km 3-4 before a final flat push for the finish. It’s a measure of how a lack of racing dents your confidence that I was unable to decide on a suitable shoe. 5 months of not racing and now I can’t even pick shoes! Turns out I wasn’t alone in this as one runner I chatted to packed a different pair for every lap. In the end I went with my Hoka Rincon as lightweight road shoe but well cushioned for the bumpy sections.

Yes we should all have done some. Had this taken place in April I was running well, scales were going the right way and speed work by Clean Coach Katie saw my pace peaking. Instead it’s August, I’ve just got back from 2 weeks in Italy eating pasta, pizza and Peroni and at heaviest I’ve been since I started running in 2011. On the plus side I’ve got back into running consistently after a poor June and July trying to recover from The Accumulator where I ran 540 (slow) miles and fell apart a little needing help from Rudi at the Treatment Lab to sort my hip.

Still it could have been worse, I could have been clubmate Lee who hasn’t run for the last 5 weeks due to work, family and lack of mojo and is wondering what idiots got him into this mess.

The start of the Covid control measures. We’ve all previously completed a health questionnaire and upon arrival are asked to check it’s still correct (no temperatures, feeling unwell, cough etc) and have our forehead temp checked with an infra-red thermometer. If all OK then a gloved volunteer passes you your bib (and a cool free gift of a race buff) and you pass on to the holding area.

A fenced off area of grass for the runners, marked up with dots at social distancing intervals so everyone has somewhere to use as a base whilst keeping separation. This works well with the number of competitors and is needed given many will have upwards of half an hour between races. We form a lose group of clubmates and mostly mock each other for lack of training or lockdown indulgence.

There’s one aid station to the side of the holding area, roped off out of reach of the runners. Instead you ask nicely for what you need and they bring it to a table for you to collect. It’s all very sanitary and clean, and works really well. For water there is a large taped tank that is wiped down between uses. For both of these they are used between races with no issue on speed which helps. How an event like London Marathon would handle 40k people trying to grab water without detracting from their splits and Good For Age attempts I’m not sure. 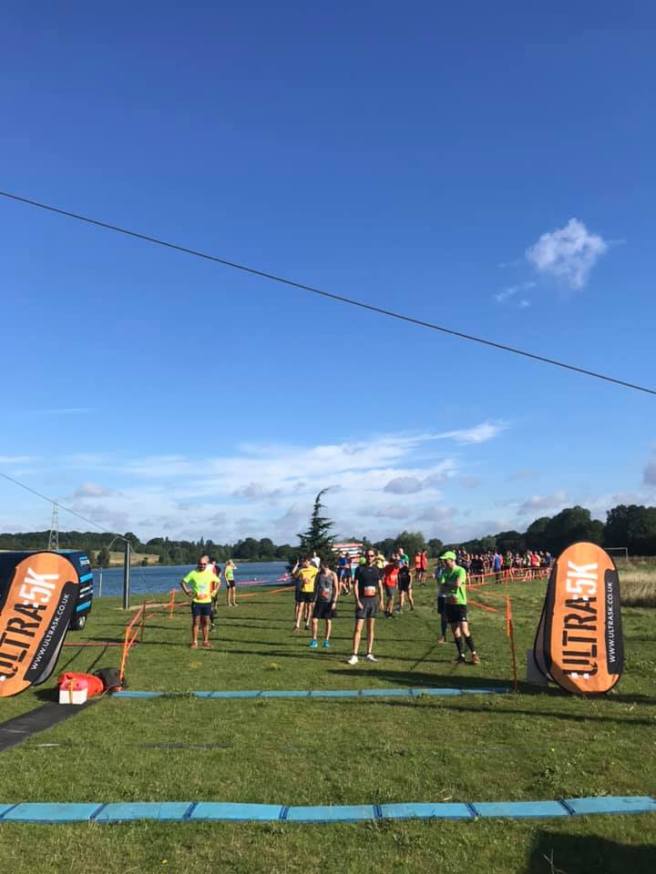 Five minutes before the hour they blow a bugle and signal everyone to assemble in the start pen. This isn’t the normal crush of a big event, instead numbered areas are spread across the pen to correspond top your bib. Three in each row and as the row at the front sets off you move forwards until it’s your turn. This keeps the separation well. The whole event is chip timed so whether in front or back row you’ll get an accurate time.

Bib numbers are assigned based on predicted 5k times with faster runners at the front to limit overtaking need. I have no idea what time I put down but I’m number 6 and feel very out of place as a portly sun burnt fatty ambles through to assemble next to the racing snakes. I presume I expected to be race weight and fast by now, not gorged on pizza and only just fully back from injury.

After a little confusion (one of my row set off with the row infront) we head off after the fast boys and I do my best to keep up. I’ve not run the route before so set a far too quick first mile on the flat (6:41) to try and keep up with the runners ahead. Even that doesn’t work as I lose them and need to follow the route markings which are regular and constant but I’d rather follow a person and not have to use my brain. The route is similar to your typical cross-country race except dry and grassy not a mud slick. The ups and downs are challenging but runable. The predicted times seem to work well as I’m only passed once and for most of the race am well away from any other runners.

Other than a couple of attempts to attend a fast session with local runners I’ve not done any speedwork since April and it definitely shows. The mental effort to push an uncomfortable pace is a struggle. I’m panting, and my brain is questioning why a tubby ultra-runner is trying to beast himself for no gain. I’d need to run five all time 5k PBs, on a undulating off road course to even keep close to the front runners so it is all rather pointless.

Crossing the line I’m knackered in a vaguely familiar way. Legs are complaining but not a “just run 100 miles” way, more of a “oh that was a lot of effort in a short time” and my heart is pounding. As with parkrun after a minute or two it’s all settled down with only a sweaty top as a reminder of your effort whilst you cheer in team mates. The race format is interesting as balances outright speed (which I left at home) against endurance and ability to recover (which I hope I packed).

Similar story, passed by the same runner at around the same point (4k) each time. One lap he’s joined by a second runner but as before everyone is separated well and I’m closer to people queuing outside the pharmacy than I am at the event, it’s all working well and feels safe.

Most importantly it’s starting to feel fun. Yes it hurts to run fast but it’s a return to the ritual and the processes of running. Line up at the start with some nerves, a few tentative steps as your legs loosen up and you get into your stride, slotting in at the right pace within the runners as you push the speed, adjusting for inclines and sharp turns, realising your strengths and weaknesses against those around you before a final push for the line. Finish to virtual high fives and chatting about how it all went. For 5k every hour you can forget we live in a pandemic and just be a runner. It’s glorious and what I’ve missed.

Every lap I’ve been dropping around 5 secs per mile which is better than expected. I like to think the endurance is coming into play and making up for the slow start as my legs ask if once again I wouldn’t like to reconsider going this fast and maybe a gentle jog would be more fun?

Every lap I’ve avoided being passed until at least 3km. For the final lap I’m passed three times in the first couple of hundred metres. Pah! I resolve to keep them in sight and it’s a pleasant change to have someone to keep on the horizon. What isn’t pleasant is the last can of drink I finished before starting as it’s churning in my stomach and I wonder if an unplanned vomit might be on the horizon as well.

I can feel the runner behind gaining on me and after a few shouts from spectators realise I’m being hunted down by my own coach Katie, clearly intent on retaining her first lady prize from previous years (which she does, clearly motivated by Prosecco). The combination of being chased and having someone to target keeps me focused and in the final straight I decide to take the runner in front. I’m actually racing! The shift in pace is a surprise but feels manageable so I keep it going and pass another then just hold on to the end, half wishing I’d pushed this hard in the final sections on the previous laps.

Overall I finished 7th so maybe my 5k predicted time to get bib 6 wasn’t so far out after all. I’ve completed my first race (or possibly five races) since Covid and done more speed work in one morning that I’ve done in the last four months. The format is challenging but definitely one I’d try and do again. The pace drop off wasn’t as bad as expected and I’ll not dwell that my final lap pace wasn’t much quicker than my marathon PB pace a year ago though. 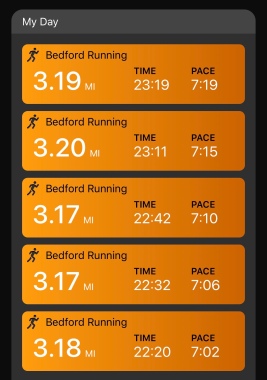 Yes completely. It was expertly organised and at no time did I feel my health or the health of others was compromised. I’ve felt more at risk in Tesco when the staff push past with a trolley of stock. For smaller scale events this arrangement works well and given Boris is keen to get everyone fit should be encouraged. How this would translate to a 1000+ person event is unclear but it’s likely some time before that’s even a consideration for event organisers.

For entry for next year – https://ultra5k.co.uk/