Up until starting this endeavour I would have expected fatal consequences for avoiding meat for 2 months. There just aren’t enough vegetable I eat to avoid certain death. Whilst I’m still limited, it is slowly growing and the general diet is improving (which says a lot about how poor it was before).

What’s becoming most evident is how badly I plan food and how often work means I miss meals. Still a fatty so a fair amount of snacking I must be doing subconsciously.

Monday – Granola breakfast then off to site for supervision of some crane lifts. Apple and banana on route. Missed lunch vans (again), so back home for carbonara dinner (sans meat for me) with some salad. A short 3 miler with dog in evening.

Tuesday – Started with a 10k with dog before a day of conference calls working from home. Cereal breakfast and scrambled egg on toast for lunch.

A poor attempt at the 640 paced run where I struggled but was better than the previous week, managed 4 miles at a not awful pace. Can’t even remember dinner. Expect I had something.

Wednesday – 9 mile run 5am, where I had the best run since Lakeland 100 broke me. Then straight to Somerset, so egg McMuffin and hash brown on route. Fruit for lunch and then headed home – I’d planned to nip out for lunch for failed due to site works. Due to family emergency the wife had to dash out and leave kids with Nana. Sat in gridlocked traffic I ordered them pizza for dinner whilst I licked the car windows for sustenance. Many many hours got home to a cold slice of pizza and bed.  Why is Somerset so far?

Thursday – Granola breakfast, fruit for snacks and meetings all day so missed lunch van multiple times. Just stared out the window at it and cried. Back home and decided in honour of a recently passed family member we should go to her favourite restaurant so off to Bella Italia. A new menu since I last went and it was excellent, went for veggie pizza with stuffed crust and baked cookie dessert. Didn’t manage to run today but pizza made up for it. 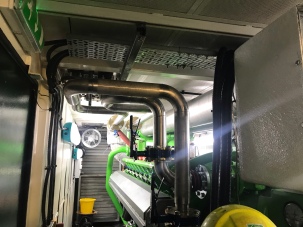 Friday – Another early start to get to Somerset so again an egg McMuffin on route. I’d been prepared with a tomato, spinach and feta pasta salad lunch but work went so badly I mostly ate Quality Street for comfort. Traffic was poor so once finally home around 8pm I tucked into the pasta salad. Pretty arse start to Xmas, and no running. Rare for me to have two days off.

Saturday – Failed to get up for the 6:30 club run so did parkrun with Bella. The puddles were so deep at one point that Bella had to swim. Back for breakfast of soda bread toast and peanut butter. Lunch of cheese sandwich. In an attempt to line stomach before drinking I tried a Quorn chicken tikka masala. Pretty good. Washed down with copious beers and some bad dancing.

Sunday –  Too hungover for the 6:45am run with mates, so slept in. As an Xmas treat we were booked into breakfast with Santa at Harvester. Vegan sausages, scrambled eggs and hash brown with beans. All pretty good but both the meat and veggie sausages were a bit dry, presume from the flame grilled technique used.

Once the breakfast had settler I took doggie out for a 10k to Willen lake. Much of the route was flooded but we ran anyway as she loves a paddle.

For dinner the wife made a hidden veggie sauce for meatballs and spaghetti, with very good Linda McCartney meatballs for me.

Next week is Christmas so will see how it goes dodging Turkey and pigs in blankets.