After a quick blast along the toll roads from the hotel (spent more in tolls than race entry) I parked up in a sports centre in a tiny town at the foothills of some big hills.

Being a Spanish Race, in Spain, the website of which was only in Spanish I was expecting to have some language issues and wasn’t disappointed. I managed to collect my bib, goody bag, and the nice lady mimed enthusiastically how to wear the timing chip on your wrist and not to lose it. One day I will be less lazy and learn more than tapas ordering levels of Spanish. 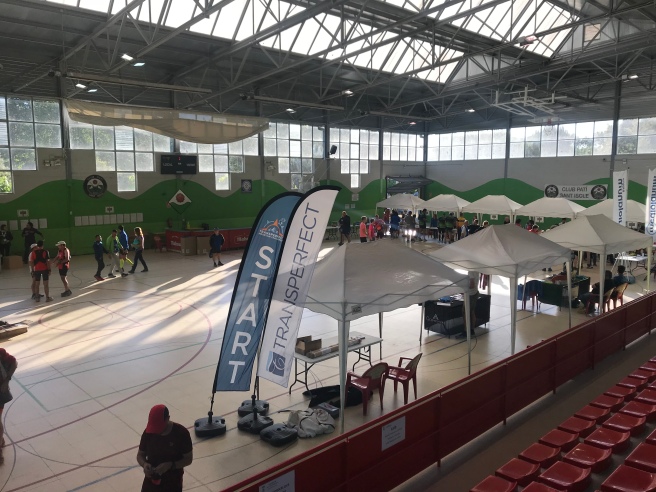 One of the stalls was offering shoe resoling, where they cut off you old dead sole, and fit a new one from a selection of treads from road to seriously lugged trail style. I’ve heard of this practice in Europe but never seen it before. The guy was the only person in the hall that spoke English and explained its very popular and costs about €40. When I think of how many pairs I’ve retired because my fat heel-striking arse has worn the heels out this is something I could really do with, plus minimising the environmental impact of running as shoes are almost impossible to recycle.

Mr New Tread also explained the race competition entry for some great prizes and I signed up, wondering what the postage and packaging on a new car would be.

After that we wandered to the start and listened dutifully to the safety briefing. It was very long. I understood not a word. Not once was albondigas, patatas bravas or gambas al ajillo mentioned sadly. What was easier to translate was the universal jostling of local runners as they pushed their mates to the back of the pen for laughs.

The race starts in the town then climbs for many miles on wide dirt tracks.

At two miles we were greeted by the traditional Spanish music of…. bagpipes for a reason I can’t fathom.

Towards the end of the first climb is an individually timed 1km section as a separate mini competition within the race for a prize. There was no way I would win against the Spanish but made sure to beat the two locals who started next to me to ensure I wouldn’t be last on the leaderboard.

The route was mostly pine trees and ferns, reminiscent of the New Forest. If you lifted up Dorset and shoved a great big hill under it you’d achieve the same conditions.

After some more climbs and a few aid stations (mostly sports drink, coke, water, watermelon and sweets) there was another timed 1km, this time downhill. I’m not great at technical stuff and had road shoes due to lack of luggage space (I’ll happily wear road shoes in the airport but Hoka shoes should not be seen in public for fear of scaring kids) so again wasn’t going to win but had considerable gravity advantage against the featherlight locals so bombed down. If you’ve run the gully section after the trig point on the South Downs Way races you’ll find it oddly familiar. The difference is most of us aren’t doing it at 6 minute mile pace with a sweaty Spaniard bearing down on you. The threat of collision and complete inability to slow down made it hilariously risky like the speeder bike scene in Star Wars but no Ewoks.

After the timed section the descents got more technical. One had a Spaniard issuing detailed warnings as we burst out from the undergrowth before disappearing down the hill. Feck knows what he was saying, I expect it was “don’t die on this bit you fat English fella, it’ll be a bastard to recover your body”.

Another section simply had a HUGE Warning Triangle. Luckily these are universal and I looked down the slope wondering how anyone could get down that. As a safety measure I waited and let two locals go ahead to their demise. Fortunately they used a rope I’d completely failed to see and descended backwards in an abseiling fashion. You don’t get stuff like at parkrun. 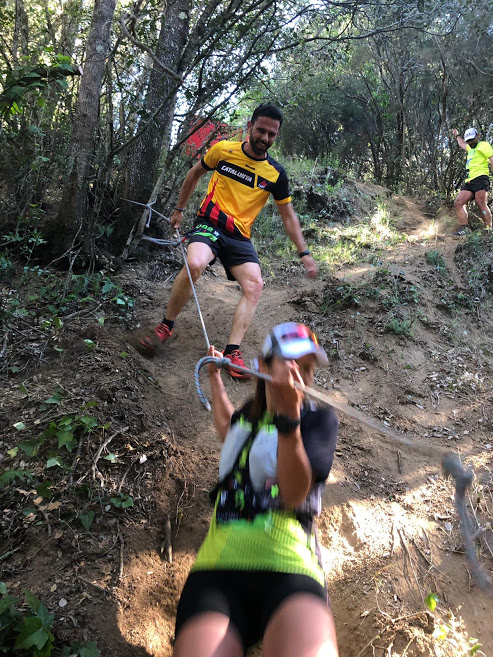 Coming off the trail into a village I hoped we’d finished in the woods. The runner in front was having quad issues and punched himself in the leg with each step like Donkey Kong.

More trail followed including a climb under some power lines reminiscent of the photos from Barkley Marathons. I was struggling for grip, using trees and roots to pull myself up. Some of the following downs were off-camber with loose sandy dirt and I mostly ricocheted from one tree to another. Fortunately I’d taken a soft bottle for drinks so could wedge it in my shorts and use both hands to catch trees as they flew past me whilst I progressed with the grace of a sofa tipped off a cliff.

One final section I found two bikers on scramblers looking down it and shaking their heads. When someone wearing a helmet and body armour considers the route a bit sketchy it’s time to worry. I elected to shove both feet into the loose gravel, keep my weight in the middle and slide down like a snowboarder. I didn’t die which is a plus point for this approach.

Finally I was out on the road again and through the town, past the bagpipe players again and into the hall to finish. 14.5 miles in 2h40 with mile spilts from 6 to 15 minutes.

I couldn’t face the post race sausage in a bun, nor the litre of chicken soup in the goody bag. The Haribo dipped in BBQ also failed to appeal so headed back to the pool.