As an updated on all that has happened book wise –

The book was officially released 15th November with the signing party the following week (due to 15th being my lovely wife’s Birthday and not wanting her to spend it surrounded by runners talking about running. I also fancied avoiding a kick in the unmentionables for subjecting her to it). 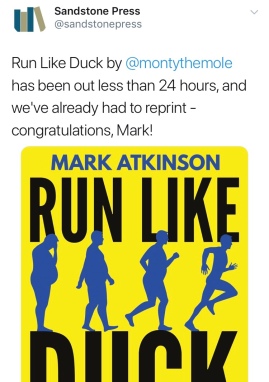 The release went well. Really well. The publishers, Sandstone Press rang me for a catch up and to advise that on only the first day they had already pressed the button on a second print run such was the demand. I think I failed to convey my full excitement at this, such was the shock and only managed a far from eloquent “Oh that’s nice”.

After a weekend in Vienna (no copies of the book in Austria, must work on the translation) it was back to UK and the official signing party. Originally planned for a book shop, as is traditional, there were a few logistical issues to be sorted and eventually the very helpful Dionne at Up & Running Milton Keynes gladly agreed to host it and did a great job.

The plan was a for a two hour session, with Cloë chairing it, a bit of Q&A and a reading. In the end it fell by the wayside as we had an unending stream of buyers for the full two hours. It was great to see so many old and new faces and talk (endlessly) about running with fellow enthusiasts. Many had amazing stories to share of shedding half their body weight, overcoming depression or bereavement and was a great example of just how good exercise can be to physical and mental health, and in particular the easy access of running with no kit requirements, pitch bookings or team selection.

Thanks to all who came out, it was truly a great evening.

I’ve not updated the blog for a bit. I’ve been a bit busy promoting the book. Did I mention I wrote a book that is now available in all good bookshops and Amazon, or direct from me here? 😉

Fear not, I have been running.

After managing 3h25 marathon at Bournemouth with some dodgy pacing, walking, whinging and generally being a bit of a moody arse I decided I should get back on the marathons if I wanted to get my times down with a plan to get a GFA for London 2020.

Later in October I stepped up the mileage. Managed a three run Saturday with combination of running with mates, parkrun and keeping a clubmate company on part of his marathon. Then spent the evening drinking heavily in Brewdog and ran the local Enigma Running marathon on Sunday as a long training run off the back of a 60 mile week. Set off intending to hold steady 8min/miles, chatted with mates and held on for the most relaxed and well paced 3h27 I’ve managed, 86 miles for the week and a surprise 1st place. Excessive beer and miles seemed to help no end.

Started with my first Cross Country race of the season. 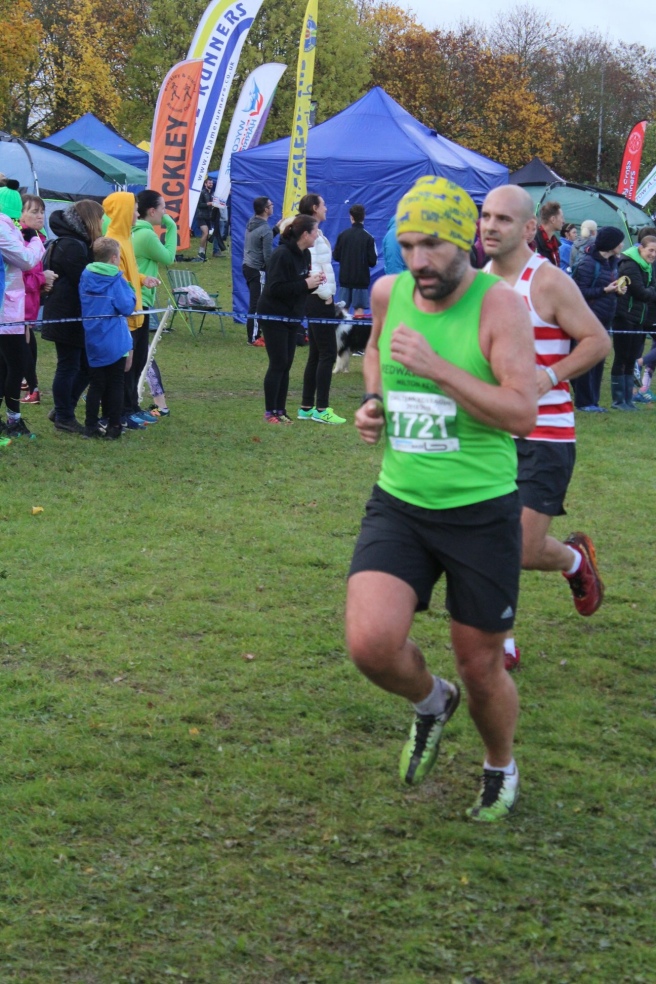 Resplendent in my wife’s club vest (I have yet to purchase a Redway Runners top as I’m basically tight as buttons) and XC spikes I did my best to stay up and keep up as we ran three laps around the Teardrop Lakes in Milton Keynes. Prior to the race my son took part in the kids race as well, his first ever cross country. It was an undulating course that he sadly didn’t enjoy as much as planned. His success and ease of running at the Bournemouth 5k wasn’t replicated and instead was replaced by hordes of kids haring off at full flight whilst he struggled with a stitch. I don’t want to be the pushy parent but also need to convince him one bad run or footie match shouldn’t deter him from trying again, it’s a fine balance, especially when he sadly shares my inner couch potato tendency.

The end of November I was down for the Colworth Hare & Tortoise marathon.

It’s a beautiful 5 lapper around woods and farm tracks in Bedford. I just wasn’t feeling the love of the running that morning and lay in bed staring at ceiling, knowing I would regret not going. An hour later I was jogging around the cricket pitch on the first lap, pleased I’d made the effort on a gorgeous Winters day. Intention was to hold 8min/miles again for 3h30 but course is a little technical and I was feeling a little fat so managed a 3h31 instead. Fourth place and my fastest of three attempts at the course (3h45, 3h38 previously). Pretty pleased with some very consistent pacing on the laps (41:05, 42:06, 42:05, 42:29, 43:53) and only lost the 3h30 on the final lap. 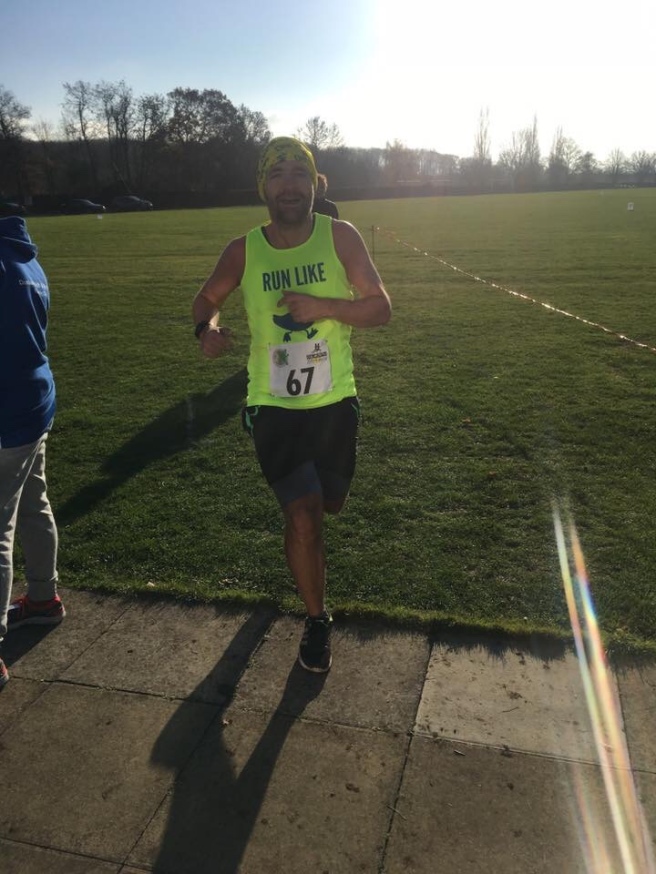 Originally I entered the Enigma Running 5k on 1st December with the son as planned father son run for an awesome medal. Combination of a later start for his football match and lack of enthusiasm further to the XC meant he declined the day before and I was left to run on my own so decided to push instead.  Attempts to get some speed back since ultras hadn’t been too successful and with the MK Winter Half looming (where I previously missed sub90 by 1 second) I felt a good sub20 5k would give me confidence and banish the 1 second demons. I went out hard, hung on to second place and missed 20min by 1 bloody second….. 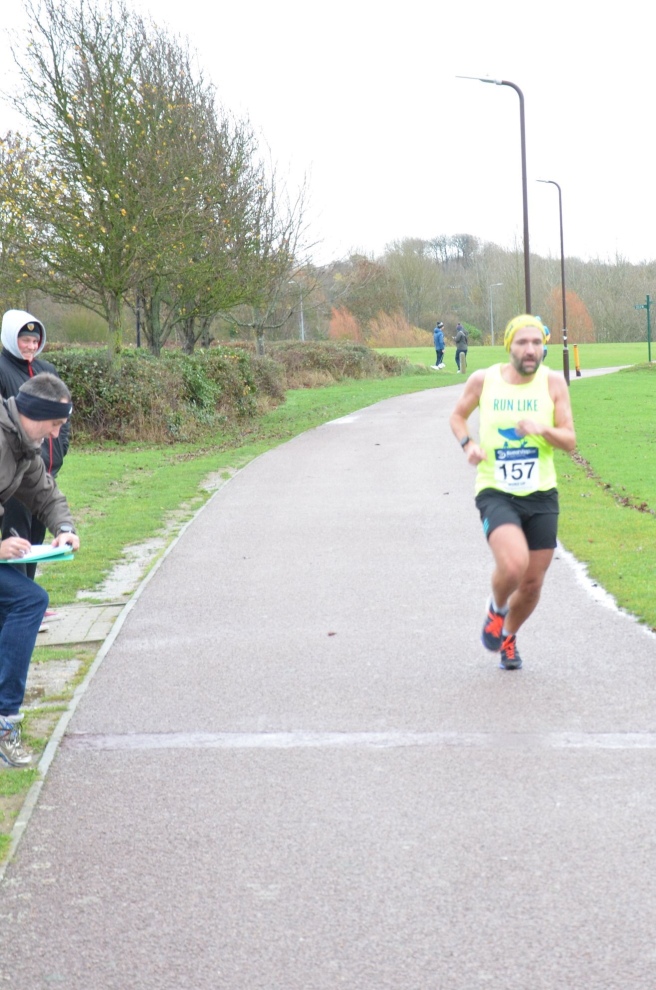 A week of speedwork followed with some reduced mileage due to work and family commitments.

Standing on the start line of the Winter Half at Willen Lake, the target pace of 6m52s per mile felt arbitrary. I was just about managing that for 4 miles in the Redway 640 session, another 9 miles seemed foolish to consider. Still I set off with clubmates Chris and Maff, and the official pacer Jamie Farmer bobbing along behind to see what I could manage.

The race followed the same story as the previous attempt – the pace felt easy at first then the miles 6-10 got bumpy and pace suffered, along with confidence. I lost Maff around mile 10, reeled him in by mile 11 only for him to drop me like a stone and fly down the hill by the Dinosaur never to be seen again. I remembered from previous year and the practice runs of the route that the final few miles are mostly fast and flat so time can be made up but it would be close.

Over the final couple of miles my mind switched back and forth from “push now, get the time” to “you’ve missed it, jog it in for an easy 1h35”.

Hoping the chip time would be a tad quicker I waited an interminable time for the timing pc to be reset by the staff to be greeted with 1h29h56s. I’d finally done, it sub90! 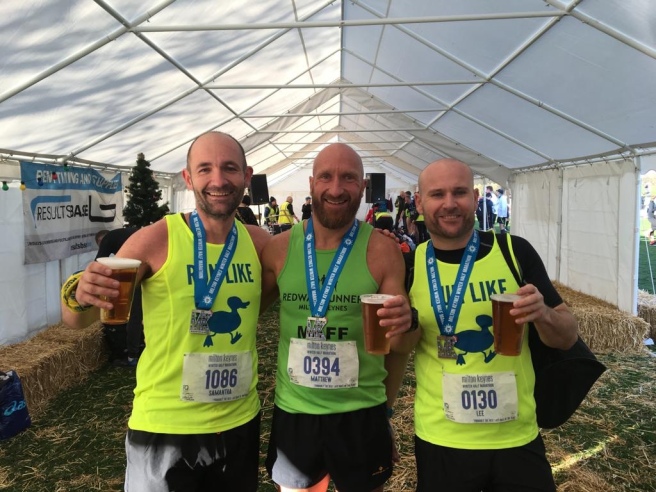