After dragging my broken self around a last minute place in the Autumn 100 and just scraping under 23hrs my plan was to be (mostly) sensible.

The day after I did a short run as a test, and pace went from barely moving to OK within a couple of miles.  This run was part recovery and part test.

Next May I’m signed up for the Thames Path 100 starting at 10am Saturday.  The plan is to finish around 21-22hrs meaning I should be done about 8am Sunday.  Then rush home to bed and rest, ready to take the position (at the very back) of the 7th MK Marathon on the Monday at 10am.  Goal is just to finish and keep my ever-present streak going.  I’ll be aiming to use every minute of the 6.5hr cut off for this one.  With this in mind the recovery run after the A100 was to check it was possible to (sort of) run after a 100.  It mostly was.

The rest of the week I did small runs with the dog, all around 30min and typically around 3 miles.  I normally find complete cold turkey for recovery makes me irritable and fat(ter) so this was my ‘sensible’ approach.

Gentle start to the week on Monday, but Tuesday I felt itching to run so managed a 10k loop at sub 7min pace which felt pretty easy.

Wednesday I ran to feel on the usual 5am run and recorded my second fastest time in two years despite never pushing full effort.

The rest of the week followed a similar theme.  I ran to feel and was knocking down Strava segment times most runs.  My recovery seemed sorted and I was running great.  Sunday in particular was an amazing run in the woods around Woburn and took my mind off my poorly father whilst I killed time waiting for hospital visiting hours.  Sadly he passed away later that day and understandably it sucked.

Running has normally been my solace.  A chance to turn off.  It wasn’t working.  It all seemed pretty pointless.  I went on the normal club runs but got progressively slower and binned several off early.  If it wasn’t for the dog needing exercise I’m not sure I’d have bothered much at all.

I’d wake up with a head full of optimism.  Today I was good.  The weather was perfect.  Dad would have been out in this walking the dog and chatting to other dog walkers.  I was going to go out and run 6 miles.  Scratch that, 10 miles was going to be smashed.   At least.  Maybe even a ‘cheeky’ (I hate that phrase but it popped unbidden into my head) half marathon distance.  Two miles in I felt awful and the drive deserted me, leaving me to dawdle home after barely 4 miles, trailing a disappointed dog.

Running mates advised me I should stop, rest and recover.  I settled for short runs most days in search of that illusive runners high.  I’d happily have settled for a runners middle or sub-prime.  Mostly I had a runners low.

The funeral was Monday afternoon.  Dog and I went out for a pre-funeral run along the Grand Union Canal where Dad would often be found.

The run was cathartic.  I’d written my eulogy and had it memorised.  I spent the run reciting and refining the words.  Alternating between laughing at my own jokes (at least one person would laugh then) and choking back sobs at the more serious bits.  Back for a shower where I didn’t need to choke back anything but just stood in the hot stream unable to properly blub just wail at life.  Was I too sad?  Was I not sad enough?  Wet dog looked on confused.  She was only there to get fox poo washed out and wasn’t prepared for such weirdness.

Turns out my mental barriers were keeping the proper release saved for the eulogy so I could slowly fall apart and blub my way through one side of A4 to sum up nearly 84 years of life, and 38 years of mine with him.

The funeral seemed to release a lot of things.  I ran the 6:40 session on Tuesday for the first time in 5 weeks.  Whilst it’s good to chat to people about things sometimes it’s nice to be around those that don’t know your problems.  You’re just a bloke come for a run with some others.  Although off the pace it was good to be back and average sub7.  The concentration obliterated other thoughts from my mind.

Wednesday 5am run I somehow managed to be late.  Same alarm for 2 years.  Still putting shoes on when I should have been in the car.  In the car when I should have started the run.  Starting the run when I should have been some half mile down the road with the rest.  So I ran until my legs ached and my lungs burnt and caught them.  Sheer effort was a welcome relief from weeks of a semi-numb emotional state with a welcome side game of “guess the runners in the dark by their running style and heights alone”.  It’s a great party game for kids and adults of all ages.

Come the weekend I felt good so signed up on the day to the Wolverton 5 mile.  It’s a small local race that I intend to enter every year but typically forget until the day after.  Starting sensibly I aimed to hold pace and managed just over 33 minutes, with a 6:34 average.  Legs had rediscovered what it means to push.  The race attracts the good local club runners.  My pace put me about halfway down the field despite being my fastest 5 miles.

Compared to big events the Wolverton 5 is cheap  (Adidas run London series are closer to £40) at £12 on the day (no medal), but seems extortionate compared to the bargain to be had the next day.  £16 entry fee for the Colworth Tortoise and Hare marathon got you a great trail route through Bedford with a bespoke medal, loads of aid station supplies but also a hot Pukka Pie and a mug of coffee at the end.  Inspired.  Sadly the fast 5 miles the day before and a heavy week (managed 73 miles) showed and I finished 3:45, 10 minutes slower than the previous year.

After two weeks of rudderless confusion  I threw myself back into running.  A single week got me back in contention to continue my 200 miles per month streak with four days and 26 miles to knock out.

Rested Monday and failed my usual recovery run so the 6:40 session became the recovery, followed by some intervals. Wednesday 9 miler was hard but got it done.

In a change from the usual running posts, this one is about my Dad who sadly passed away on 5th November, which the nation marked by lighting fireworks.
Whilst I view two wheel transport as basically cheating, he was a keen cyclist and as a young man was a sponsored rider in a local cycling team way back in the early 1950s (Dad was born in 1933, grew up during the war and was one of the final young men sent to do national service, despite the war being over by that time). I still have one of his winning cycling trophies on the shelf from 1951. It’s old and tarnished and a little battered but authentically so. I’m told his winning time would still be considered impressive in these days of carbon fibre, aluminium and lycra. It’s likely his front forks weighed more than an entire road bike today, and the nearest to an energy drink he saw would have been a strong Ribena. Whilst we chose different sports and I’ll never win a proper race we both pushed ourselves on endurance events where sheer perseverance is rewarded. 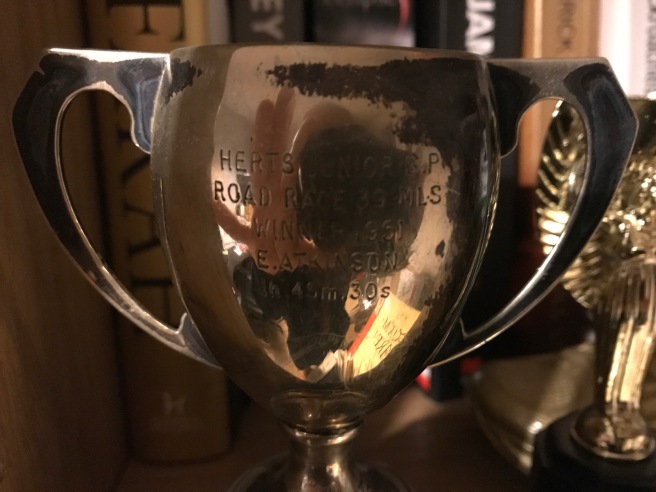 Dad was stubborn to the point of pig-headed. He passed that on and aside from a cast iron stomach and fat reserves suitable for a polar expedition it has been the main quality to keep me going through many a painful mile. He always finished what he started, so must I.

In many ways he’s to blame for my running. From an early age he imparted an appreciation of the outdoors. Despite doing my best to bury this beneath a veneer of inactivity, eating, binge watching and computer games it broke back through in 2011 when I started running and some of the happiest times have been running up hills or through woods in all that the British weather has to throw at me, good or bad.

On what turned out to be his final morning after nearly 84 years on the Earth, I went out for an early morning run with friends whilst killing time before hospital visiting hours. The weather was cool but idyllic. We followed the footpaths around Woburn and skirted the safari park to add wolves, zebras, kangaroos and antelopes to the list of animals seen on route, along with the more usual deer, squirrels and muntjac. It was the sort of route he would have loved to walk, armed with a walking stick for the steep sections and accompanied by a faithful dog it would have been the high point of his week. 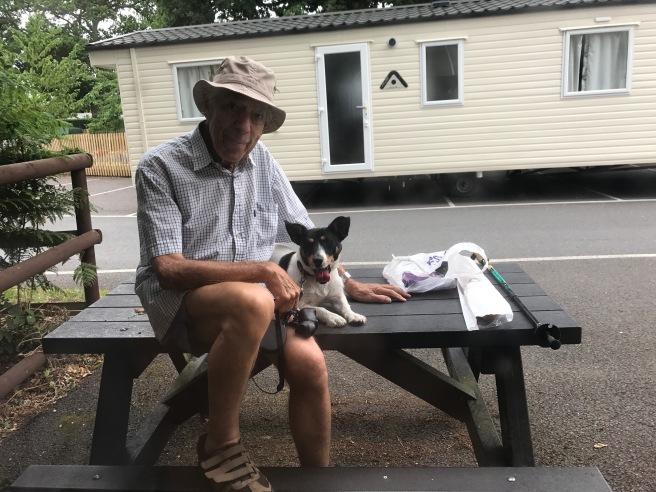 Sadly as the cancer returned for a third time he gradually slowed over the last few months but still left the house most days. Even the day before his death he grew so weary of being confined to the bed (only his second day in hospital) he demanded I walk with him around the hospital ward. The walk was slow and short but he felt good to be up. As much as it pained him to admit he needed help I supported him patiently as he walked on legs not quite under full control. As he had held my hand on my first tentative steps in the world so I helped him on what proved to be his last. He thanked me when we left and choked back emotion. Billy although only 7 noticed this and on the walk back to the car we discussed how it was sad for Grandad Ted to admit he needed help from his son, but likely also a proud moment when he could finally pass on the duty of being the carrier, the lifter, the fixer of broken things.

Sadly not everything can be fixed and over the course of Sunday he deteriorated and finally succumbed to the inevitable in the evening surrounded by family. For a man so fiercely independent and who hated being fussed over the end coming so short and sudden was a blessing. Since the prognosis a year ago he’d refused to be curtailed by the illness and enjoyed himself to the fullest, only enduring a few days of hospitalisation before a well earned rest for a lifetime of activity.