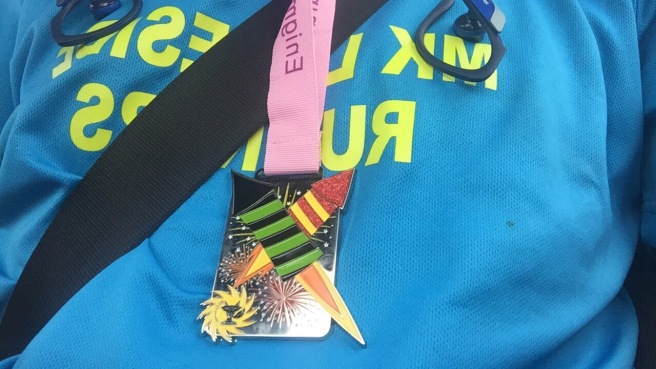 After four marathons in October that varied from a second quickest 3:24 to a ‘kill me now’ 4:50 it was nice to start November with a simple return to Caldecotte lake and 7.5 laps for the Enigma Fireworks Marathon.
Against a field of 52 I set off at a fairly sensible pace and ran to feel, resisting the urge to stick with the front runner as he shot off at sub7 pace. The weather was cool but not too bad and I trotted around trialling my new arm sleeves. I’ve resisted these in the past as they’re worn by the pros and I’m certainly not one of those. Recently have seen them recommended by more normal runners, particular on ultras where they can be rolled down to form a sweat band, and rolled back up as required when weather cools, particularly when wearing a waterproof. They worked well and will be using them at SDW50 and probably SDW100 as a lightweight means to turn a tee into a long sleeve top during the night stages.

Typically on marathons I set off way to fast and build a buffer, allowing me the luxury of a 9min mile target to come home in 3h30 and keep a sub8 average. Today I’d set off a lot more sensibly and needed to maintain sub8 the whole way with little margin for error. In terms of running effort it’s far more relaxed but can make you a lot more nervous on the finish time. It was only with a mile to go I was sure of the finish time and crossed the line in 3h28 and second place. Unbeknownst to me the first place speedy runner had faded badly and was only a few minutes ahead. After a quick shower it was off to help brother-in-law move flat and carry furniture up 3 flights of stairs as a cool down.

Number 85 sounds awfully close to 100. 9 months left to clock 15 more marathons with the little task of my second 50 miler and first 100 miler in there.